Moll started an after-school guitar building program at LSMS in 2012, and has helped more than 160 students and staff members build guitars and ukuleles. He discovered the STEM Guitar Project in 2013, and attended one of their guitar building workshops that summer. The STEM Guitar Project offered Moll an instructor position in 2017. He has trained educators in San Francisco, CA, and Houston, TX, as well as a number of educators and military veterans from the Puget Sound region. Moll quickly became an important part of the project development team, and was instrumental in expanding the project to include military veterans. He is currently teaching his fourth group of veterans remotely via Zoom.

“I’ve loved woodworking since sixth-grade, and I started playing guitar in seventh-grade,” said Moll. “I’m not sure why it took me so many decades to put the pieces together—I can’t think of anything cooler you can make out of wood! I’m passionate about building guitars, and I love sharing my knowledge with anyone who wants to learn. Building a guitar appeals to all ages, genders and ethnicities. It has been an absolute joy to be a part of the STEM Guitar Project, and I have become very close to my teammates. We are spread across the country, and it’s been great fun to work with my colleagues that teach at the high school, community college, and university level.”

The prestigious and competitive ITEEA Gerhard Salinger Award “...is presented annually to an individual or team of collaborators whose work has exemplified, promoted, investigated, and/or enhanced teaching and learning in STEM through the effective application of technological/engineering design activity. The award was created in honor of Dr. Gerhard Salinger, program officer at the National Science Foundation from 1989 to 2014, whose work to promote the use of engineering design activity and whose advocacy for technology and engineering education has widely influenced STEM education. The award is open to classroom teachers, university educators, school administrators, and others whose contributions are consistent with the selection criteria.” 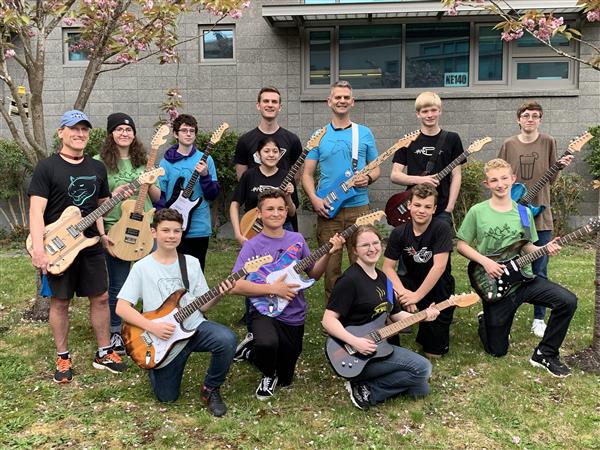 Alex Moll, back row, third from right, is one of six winners of the Gerhard Salinger Award for Enhancing I-STEM Education.